It doesn’t feel like a John Ford movie…and that’s the good news. It’s sexier and feels more ‘adult’ than you usually get with his simplistic fare. A good solid script by John Lee Mahin decidedly helps. Clark Gable is a big game hunter in the wilds of Africa vacillating between the love of two otherworldly beautiful women who just happen to be in his neck of the veldt, lusty Ava Gardner and prim Grace Kelly. (Don’t ask, only in Hollywood, folks.) You could probably make a lot of theories about who’s really the hunter here and who’s the hunted, but why overthink the surface appeal of the gorgeous locations and three iconic leads. Gardner is especially alluring doing her patented ‘earthy’ thing, at turns funny and ravishing. And there’s some authentic wildlife footage mixed into the proceedings, especially some up-close-and-personal stuff of a family of gorillas that’s aces. 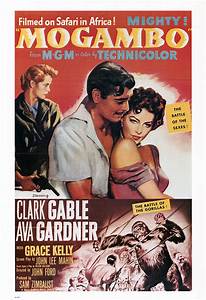 Posted by roncastillonyc@yahoo.com at 12:23 PM