The desire to copy the musical comedy success of Rodgers and Hammerstein’s “The King and I” is palpable here. Does it meet the challenge? Frankly, no. But there’s a still a lot to love. You get the Broadway pedigree, the Far East setting, the two sets of lovers, and a decent amount of comedic repartee. But it’s really the operatta-like score that saves the day. Hit songs like “Stranger in Paradise”, “Baubles, Bangles, and Beads”, and “The Lamp is Low” that have lyrics set to melodies taken from Alexander Borodin classical pieces and sung by the the leads Howard Keel, Dolores Gray, Vic Damone, and Anne Blythe. All four, especially the under appreciated throaty-voiced Gray, turn in fine performances despite the weak script. And while the direction by Vincent Minelli is by-the-numbers, the production looks terrific in a stylized Hollywood Goes to Arabia fashion. You’ve never seen so much silk and satin in one place. Also of note is the jazzy and acrobatic choreography by Jack Cole. There are a couple of numbers that really stand out, they’re probably not based on Middle Eastern dance moves, but boy, are they sexy and fun. 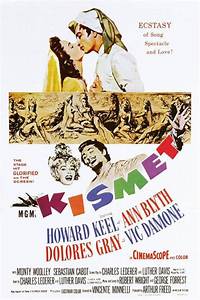 Posted by roncastillonyc@yahoo.com at 3:50 PM