We’d all prefer our Rosalind Russell as a funny lady. Nobody was better ‘cept maybe Ms. Ball on television. But even a dramatic Roz is better than most actresses anyday. And so here we get her in a sincere if somewhat humorless biopic as the selfless Sister Kenny, an early 20th Century nurse who pioneered treatment for children’s “infant paralysis”, later defined as polio. (You can already see why there are no laughs). Nevertheless it’s quite fun to see the feminist streak running thru the tale as, time and again, the domineering nurse has to defend her theories (and herself) to countless hospital administrations filled with skeptical male doctors. How could a lowly nurse know anything about medical research? It would be nice to say such patronizing practices are a relic of the past, but in this post-feminist #metoo world it’s sad to say they’re not. 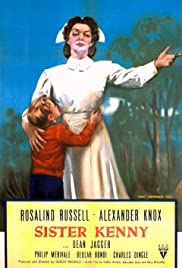 Posted by roncastillonyc@yahoo.com at 12:15 PM