Richard Widmark made an indelible mark on Hollywood history here with one of the most auspicious film debuts ever. His portrayal of villain Johnny Uto is at turns smarmy, funny, engrossing, and chilling…no one had ever seen a pure sociopath depicted on the screen like this. He walks away with the movie in his pocket right under the nose of the earnest lead Victor Mature. The story is solid noir fare. Mature is a two-bit convict made to turn state’s evidence by Assistant D.A. Brian Donlevy against Widmark. Revenge ensues and it makes for some nice suspense set pieces between the two leads. Credit director Henry Hathaway for that and the almost documentary feel of the whole enterprise. And let’s not forget the notorious murder scene with Widmark that’s the definition of twisted. Is is so sick it’s funny…or the other way around? Either way it’s it’s unforgettable. 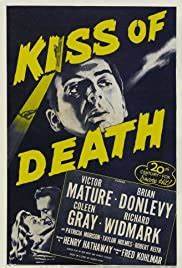 Posted by roncastillonyc@yahoo.com at 12:19 PM