The poster bills it as "MGM's Love Making Musical!" They weren't lying. This is one of those movie premises that on the surface seems innocent enough, but when you really give some thought to what's going on you clearly see what the filmmakers were trying to slip  by the buttoned-down sensibilities of the 1950's American public (and the censors). Seven hearty red-headed mountain men, all brothers, in the pioneering days of the Oregon territory, fall in love, woo, and marry seven women from the nearby town. Let's be clear, though. They're main motivation is that they're pent up. Really pent up. Something awful. And they need...well, you know. There's a robust swagger in this musical that differentiates it from most of the glossier MGM fare. The groundbreaking choreography, by Michael Kidd, is almost purely acrobatic, giving the proceedings a decidedly lustier feeling. The justly famous barn raising sequence where the brothers are flirting with the girls and trying to fend off local suitors is a thrilling showstopper. A lot of the songs in the fine score by Johnny Mercer and Gene de Paul have a big, expansive Copland-esque feel to them. And when they're sung by the full throated baritone of Howard Keel, who's the eldest brother, and the lovely trilling Jane Powell as his intended, it's musical ear candy. But back to the sex. There are two hot scenes in underwear, in one the brothers roust about only in their longjohns, the sexiest bunch of ginger lumberjacks ever put on film, and in another the girls have a whole number wearing only their petticoats and super cinched corsets. And let's not leave out the song and dance number where the brothers are pining for their cloistered girl crushes while they're synchopatedly swing their, ahem, axes. Look for a young Julie Newmar (here billed as 'Julie Newmeyer') as one of the brides. The direction is by Stanley Donen. Filmed in Cinemascope. 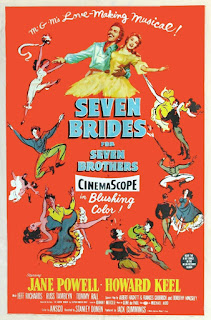 Posted by roncastillonyc@yahoo.com at 4:55 PM