By all measure of reason, this movie should be unwatchable. But damned if it doesn't suck you in and jerk your tears from one end of the screen to the other. A headstrong youngish British woman (Ingrid Bergman) makes it her heart's desire to become a Christian missionary in 1930's China during the Sino-Japanese war. This despite the fact that she has no training or money to get there. But get there she does. She signs on to work for an elderly missionary woman (Athene Seyler) in a remote northern province who runs a dilapidated inn. With pluck and hard work they begin to turn the place around and to help the local folks and travelers, all the while teaching the word of Christ. As the war heats up and the Japanese infiltrate the territory, Ingrid has to get one hundred--yes, one hundred-- Chinese orphans in a treacherous overland trek to safety. Missionaries, orphans, and a white hero that saves the third world...sound icky? Think again. Bergman's performance is so endearing and she imbues the character with such passion she makes the whole movie. She makes you forget some other questionable casting issues too, like her romance with a half white, half Chinese military officer played by Curt Jurgens and her winning over of the local mandarin,  Robert Donat in his last film role. You could never get away with this white-person-in-native-role business today. If both actors didn't give such sincere performances in their almond eyed makeup you'd be throwing fried rice at the screen. Yeoman director Mark Robson doesn't go in for any flashy direction. He knows where to put the camera to tell the story in solid script by screenwriter Isobel Lennart.  It's a testament to the filmmakers that the whole thing was shot in England! With a nice score by Malcolm Arnold. 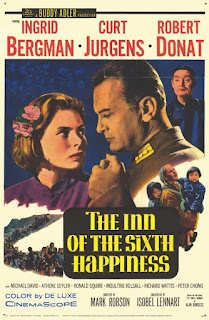 Posted by roncastillonyc@yahoo.com at 3:48 PM