Warner Brothers was the studio for gangster pictures in the 1930's. Tough, realistic, violent, and fast paced they were hard knuckle entertainments and were often based on the real crime stories of the day, "ripped from the headlines"scenarios. This fine entry was based on the takedown of underworld crime boss Lucky Luciano by a group of women who worked in his prostitution ring and who would turn state's evidence against him. Strong-willed Bette Davis is leader of the "hostesses" who run up against the nasty kingpin played by Eduardo Cianelli. She teams up with the earnest DA, Humphrey Bogart, who plays against his usual bad guy type, to bring down the heavy when her innocent younger sister (Jane Bryan) gets in too deep with him. Davis is just great here, feisty and resilient. It's refreshing to see a woman protagonist in this usually male-dominated genre. And her scenes with Bogart play like two fine tennis players volleying that rat-a-tat dialog between them. The gritty direction is by Lloyd Bacon with some uncredited help by Michael Curtiz. 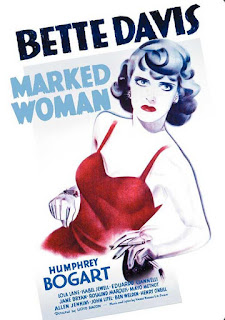 Posted by roncastillonyc@yahoo.com at 9:21 PM