Hollywood's telling of the first transatlantic solo flight by pilot Charles Lindbergh in 1927 was a colossal bomb when it was released. Maybe it was because star Jimmy Stewart was way, way too old to play the historic figure (Lindbergh was 25 at the time of the achievement, Stewart was 47), or maybe Lindbergh's luster had faded because of his pro-Nazi stance during WWII, too recently familiar to an Eisenhower-era American public. Whatever the reason, a fresh look now shows this to be an slick and entertaining history lesson. Credit the iconic Stewart for shouldering most of the picture in the tight confines of the titlular flying machine's cockpit. His natural gifts for empathy and facial expression put the performance over (he pulled off much the same feat in Hitchcock's "Rear Window" a few years before). It helps that he has a sprightly script by director Billy Wilder that is filled with a number of flashback scenes leading up to the big flight that sparkle with his patented witty inflection.
He manages to fill the story with edge-of-your-seat suspense despite the fact that we know the ending...SPOILER ALERT: Lindbergh lands. 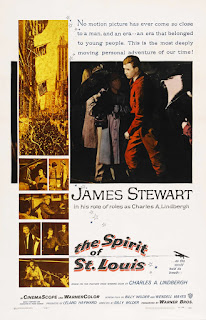 Posted by roncastillonyc@yahoo.com at 3:09 PM