This backstage musical trots out every hoary cliché in the book, except this is the movie that invented all those clichés in the first place. The insanely driven director (Warner Baxter) who's teetering on killing himself from overwork, will his latest show push him over the edge? The wise cracking chorinnes (Una Merkel and Ginger Rogers) struggling to make ends meet who'll take any man or bit part, whichever comes first. And, best of all,  the naive ingenue (Ruby Keeler) fresh off the farm who has to take the lead on opening night when the aging star (Bebe Daniels) breaks her ankle. Even tho the pace and dialog are snappy with that sassy New York patois Warner Brothers made famous in gangster pictures, it's really the knockout musical numbers, staged by choreographic whiz Busby Berkely that make this a groundbreaking film. It's almost a misnomer to call what Berkeley does here choreography, he's basically using human bodies to create graphic shapes that swirl and undulate, surely groundbreaking for it's time. Yes, the story is all cornball, and Keeler's acting is wince causing, but it's still fun Hollywood history and a must see. 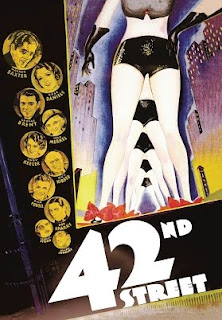 Posted by roncastillonyc@yahoo.com at 9:35 AM