An eerie little chiller from the early 1960's that looks ahead to other genre fare of that decade like "Dark Shadows" and "Rosemary's Baby". A young co-ed (Venetia Stevenson) is doing her term paper on the New England witchcraft of the 17th Century. Her professor (Christopher Lee) suggests she visit his hometown and stay at the inn of an old friend. Well, when the professor is Christopher Lee you don't have to be a genius to see that he's not sending her to a lovely tea social at the local library. This town is Spooky City. And the inn's proprietress (Patricia Jessel) is even creepier. Maybe there's a connection to this town and a coven of witches way back when,  but I'll avoid any spoilers. Clearly the whole picture was done on a shoestring budget but that works to it's advantage. The entire town is created with sets, the requisite fog, and shadows. Director John Moxey keeps it all atmospheric with some well-timed scares along the way. There are even some parallels to Hitchcock's "Psycho" that debuted the same year. A worthwhile gem to discover, even better you can see it on YouTube here. 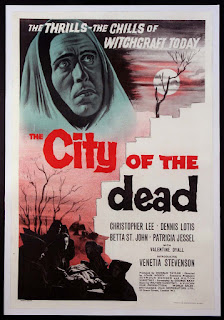 Posted by roncastillonyc@yahoo.com at 11:11 AM