This was the third filming of Rex Beach's novel of the Yukon gold rush of the early twentieth century and it brings together the unlikely, but charming, pairing of John Wayne and Marlene Dietrich as a fortune hunter and his dance hall proprietress ladyfriend. They're trying to protect their claim from a new unscrupulous gold commissioner who's out to swindle them played by Randolph Scott. He's also got a roving eye on Dietrich. And who wouldn't? She's stunning here in one feathered and sequined gown after anther which her hair done up in the highest Gibson Girl 'do you've ever seen. She's the one oasis of visual prettiness in the hardscrabble, muddy town of Nome where all the action takes place. This was clearly a bid to capitalize on Dietrich's other western role, the big hit "Destry Rides Again". Sadly, she doesn't do one of her patented dance hall ditties here. There's a lot of action, culmination with a huge fistfight between Wayne and Scott  where they tear up practically all the sets. It's a rouser. Solid entertainment all around. 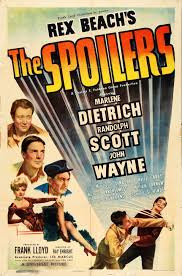 Posted by roncastillonyc@yahoo.com at 5:19 PM