One thousand kilowatt star power on display here. A luminous Claudette Colbert is the daughter of a penniless marquis (the ubiquitous Edward Everett Horton). When she falls for, and agrees to marry, a rich businessman on holiday in the French Riviera (Gary Cooper at his most unbelievably handsome),  she finds out she's not his first wife but his eighth. That's a problem for her so she decides to make sure he's sincere. It's a paper thin plot, but it's wrapped in a script filled with asides, non-sequiturs, one-liners, and sightgags by Billy Wilder and Charles Brackett. Some of the bits are laugh-out-loud great. Maybe it's that famous "touch" of the director Ernst Lubitsch, but big credit goes to the effortless élan of the two stars who make it all look way to easy. And isn't that the definition of 'star' anyway? 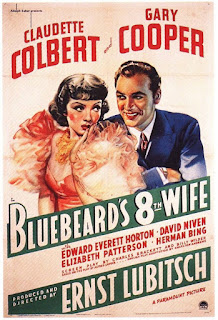 Posted by roncastillonyc@yahoo.com at 11:08 AM