Probably best described as "offbeat", director George Cukor, deemed it "picaresque"; suffice it to say it's an odd little film that has grown into a minor cult classic over the years. A young girl (Katherine Hepburn) and her recently widowed father (Edmund Gwen) are on the lam because of his gambling debts. She disguises herself as a boy so as not to attract attention. The plot is shambling and rambling as they stumble into one minor adventure after another. Along they way they pick up a Cockney grifter (Cary Grant) in a performance that showed Hollywood he could do more than look handsome, it was a career breakout. By far the most interesting aspect of the film is the shuffling of gender roles and gay subtext. Every new person Hepburn encounters (she's equally impressive as both sexes) has an impulsive attraction to her character, one they most often can't explain...even when they find out she's a girl. A definite filmic curio to seek out. 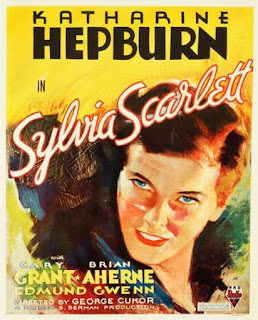 Posted by roncastillonyc@yahoo.com at 9:56 AM