One of the strangest pairings of director and movie genre ever attempted. Francois Truffaut was one of the seminal creators of the French New Wave, a style of filmmaking noted for it's looser, grittier, less formalistic approach to storytelling. It's themes were contemporary and dealt with current social issues. So what was he doing helming an adaptation of a popular science-fiction novel set in a dystopian future? Well, the answer was probably (and primarily) Truffaut's love of the written word and/or art, and, secondarily, the dangers of totalitarian governments. It's a frightening future where books are banned, not just censored. You can't read them, own them, write them. Oskar Werner is a "fireman" working for the state. It's his job to ferret out and extinguish any books owned by lawbreakers. When he meets a lovely girl on the monorail (Julie Christie) who we find out is part of an Underground devoted to saving and preserving books, his sentiments begin to change. But if his superiors find out he's fried, pun intended. The movie has strange rhythms. It doesn't have the pacing of a typical Hollywood thriller, but the oddly antiseptic production design of this paranoid world somehow fits. It's got a Flash Gordon-meets-Mod-Sixties vibe. Werner and Truffaut famously hated each other through this production but the actor's Teutonic accent works to heighten the Nazi-like proceedings. In a another odd touch, Christie plays a dual role as Werner's mind-numbed wife who spends her days in a drug induced torpor watching her giant flat-screen TV (a future prediction the art directors got right). This is one of those quirky movie curios that's definitely worth the time, if only for the haunting and beautiful ending, justifiably famous, that only an artist like Truffaut could pull off. 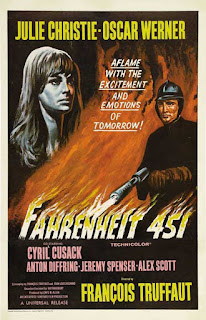 Posted by roncastillonyc@yahoo.com at 10:35 AM