By 1947 the film noir genre had firmly taken hold as a type of Hollywood film. The tough talking, big city detective prowling an urban landscape of underworld criminals and femme fatales, trying to solve some sordid crime with too many suspects on hand. So it was inevitable that it was a ripe for parody. What's interesting about this entertaining little film is that the filmic ribbing came so quickly to the nascent genre and it manages to bend the rules but also play by them as well. Bob Hope, sans  his usual screen cohort Bing Crosby, although Der Bingle does make a cameo appearance here, is a frustrated advertising photographer who dreams of being a hard boiled private eye. Without spoiling anything, he gets his wish, but he bumbles his way through the entire proceedings. Everyone in the picture is playing it straight, as if they're in a real noir thriller, including the heavies, Peter Lorre and Lon Chaney. Hope plays all the comedy to himself, in sotto voce asides so that only we the audience hear his thoughts. It's a running stream of consciousness gag that was later stolen by Woody Allen in his nervous comedies to great effect. Luscious and lovely Dorothy Lamour is on hand as the wealthy widow who hires Hope to find her missing husband. She's just window dressing, but then so many noir females were just that. At least she's game and has fun with the part. If you like genre-bending fare do put it on your list. 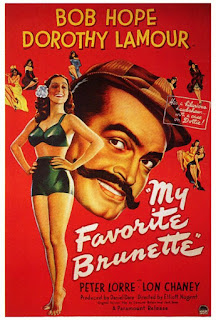 Posted by roncastillonyc@yahoo.com at 12:00 PM