One of the more interestingly subversive films of the buttoned-down 1950's. It utilizes a well-worn theme, that underneath the placid surface of squeaky clean suburbia lie messy undercurrents, but in its own unique way. Director Nicholas Ray is playing in the same expressionistic territory as that other dissector of mid-Century mores,  Douglas Sirk, as in his best films of the same period like "All That Heaven Allows" and "Imitation of Life". James Mason is a perfectly ordinary school teacher in a perfectly ordinary suburban small town with the requisite beautiful wife (Barbara Rush) and cute little boy (Christopher Olsen, who also played the iconic 50's tike in Hitchcock's "The Man Who Knew Too Much" ). But Mason starts to suffer from painful 'spells' that incapacitate him, one of those convenient Hollywood maladies that help the plot. When he's diagnosed and given only a year to live the only answer his doctors come up with is a new experimental miracle drug. The catch? It turns him into a nasty, mean, S.O.B, a hundred and eighty degrees from his former self, and to make matters worse, the drug is expensive and it's killing the family finances. This is Dr. Jekyll and Mr. Hyde comes to Pleasantville. The story turns from weapy melodrama to tense thriller as  Mason, truly frightening here, torments his poor family. Rush is effective in her noble suffering, does she choose to watch her husband die...or live with a monster? Watch how Ray heightens the mood and symbolism through sets and lighting. Walter Mathau is on hand too as a family friend. This is an underrated find for cineastes. 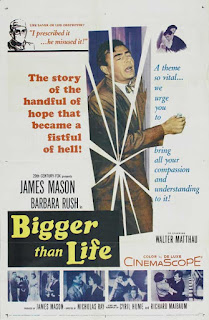 Posted by roncastillonyc@yahoo.com at 2:38 PM