This is the movie that put the screw in screwball comedy. An amazingly sexy sex farce that somehow manages to tell you exactly what's going on but only by inference and innuendo, all while remaining smart, witty, and very funny. The Hayes Code censors were either asleep at the wheel or just plain dumb to let this one slip through. It's a modern take on a tale as old as Methuselah. Roughly based on a poem by Alfred Lord Tennyson, Irene Dunne returns to her family and husband (Cary Grant), after seven years having been assumed dead from a shipwreck. Grant has since remarried to a stiff new wife (Gail Patrick) and hilarity ensues. He's married to two women while both are staying at the same resort hotel, wink wink. To complicate things, he finds out that Dunne wasn't alone on that deserted island, she was with Randolph Scott, who breaks the Hunk-O-Meter scale he's so blindingly handsome here. Grant fumes when he imagines the possibilities of those two canoodling on their island hideaway. But on a meta level, there's more here than meets the eye. See, in real life Grant and Scott were "roommates" living together, hopeless bachelors, FOR TWELVE YEARS in the '30s and '40s. Was it a real love affair as many have speculated? Just Google "Cary Grant Randolph Scott lovers" and look at the cozy pictures of their living arrangement and you decide. But it does add a spicy layer of meaning to the film, as in the scene where Grant first spots Scott at a swimming pool in his skimpy bathing suit. His eyes bug out so much it's like he's a character from a Tex Avery cartoon. Dunne is luminous and her chemistry with Grant is undeniable, that's  probably why they made three pictures together. Director Garson Kanin concocted this frothy cocktail and it's laced with some pretty strong spirits that'll leave you with a groggy smile on your face. 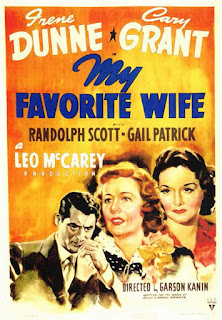 Posted by roncastillonyc@yahoo.com at 4:03 PM