Maybe the most successful piece of war propaganda Hollywood ever produced. A moving and sentimental story of one British family during the early stages of the WWII and their town's siege by German forces, this film caused American audiences to sympathize with the Allied cause in spades. Isolationism was a dead, let's go kill those Jerries! This is one of those classy, glossy MGM prestige pictures that still works because director William Wyler carefully calibrates the message without getting preachy, and the tears are earned, not squeezed out of you. The fine cast, headed up by Greer Garson as the stalwart mother, Walter Pidgeon as her affable husband, and Teresa Wright as the teenage ingenue who falls for the Minivers' son (Richar Ney), are just the sort of likable people Americans identified with. Besides one nasty German soldier, the great Dame May Whitty is on hand as Wright's grandmother to inject some stuffy antagonist troubles into the family's tribulations. A sincere and entertaining effort all around. 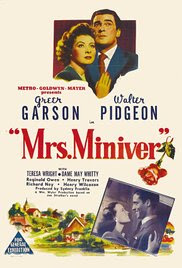 Posted by roncastillonyc@yahoo.com at 3:10 PM