If you needed any other proof why Clark Gable was nicknamed 'The King' in 1930's Hollywood, then look no further than his charismatic star turn in this tale of the the Yukon Gold Rush at the turn of the 20th Century. He's sexy as all hell as a down on his luck fortune hunter who's searching for an apocryphal gold mine up in the backcountry mountains. He's aided by three loves, Loretta Young as the wife of lost prospector who knows the way to the gold, Jack Oakie as his comic relief sidekick, and Buck, his loyal St. Bernard sled dog. The story gives only a passing glance to the plot of Jack London's popular novella which put the anthropomorphized Buck at the center of the action. This being Hollywood they weren't going to make the biggest male lead of the day play second fiddle to a dog. What you do get is a lot of fun romance, dog races, snarling wolves, and stunning wintry vistas shot in Washington state. Reginald Owen shows up as the hissable baddie trying to steal the gold (and Buck). And let's not discount the performance of the canine himself. It's no wonder that Gable ends up with the lovable pooch over Young! 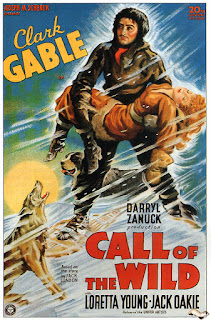 Posted by roncastillonyc@yahoo.com at 10:28 AM