Proof an all star cast can take okay material and transform it into something great. Liberally adapted from a play by Maxwell Anderson, John Huston directs this story of a WWII vet (Humphrey Bogart) visiting the widow (Lauren Bacall) of one of the men in his company who died under his command in the battle of San Pietro. She lives with her wheelchair ridden father-in-law (Lionel Barrymore), the proprietor of a seen-better-days resort hotel in the remote Florida Keys. Things take a noir turn when we find out the the other guests at the place are a snarling kingpin mobster (Edward G. Robinson), his band of thugs, and his desperate ex-lounge singer gun moll (Claire Trevor). A bad hurricane hits and there's much verbal sparring, as Robinson tries to strong arm Bogie into getting him to Cuba and away from the law. Things could've gotten stagey here but Huston keeps things moving and the cast is like a finely tuned machine, everyone doing what they do best, especially Trevor who won a much deserved Oscar for her emotionally bruised character. When she does a boozy off-key rendition of "Moanin' Low" she's an exposed raw nerve. Robinson is always good as the heavy and Bogie is...well, Bogie. Nobody did the reluctant hero better in the history of movies. 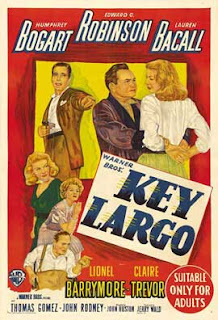 Posted by roncastillonyc@yahoo.com at 8:30 PM