Remember that episode of "I Love Lucy" where Lucy schemes to get a part in an Italian movie and she wants to emulate those lusty Italian actresses of the day so she ends up getting inspiration by stomping grapes in a vineyard? Well, Anna Magnani was one of those prime leading ladies of Italian neo-realism cinema and this movie brought that sensibility to Hollywood. It's a fine adaptation of Tennessee Williams' play (he did the screenplay), and he wrote the piece with Magnani in mind. How different she must have seemed from all the perfectly made-up and coiffed actresses of the time! Loud, unkempt, zoftig, with a face far from classically beautiful, she's totally refreshing and unforgettable. No wonder she walked away with Academy Award Best Actress honors that year. And if you come expecting Williams' usual mix of Southern Gothic sturm und drang told in poetic purple language, think again. This story of emotionally closed off widow opening herself up to a younger new love is happier and lighter in tone, an opera buffa set on the steamy Gulf Coast. Burt Lancaster is the clownish new paramour serving up a character you almost want to hate he's trying so hard to be likable, but before long he wins Magnani (and you) over. Yes, there's a lot of symbolism flying around--not one, but FOUR characters sport the title skin art--but with acting this good, all shown off in Oscar winner James Wong Howe's nuanced black and white cinematography, you'll go along for the earthy ride. 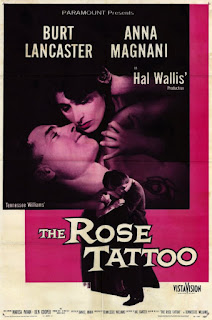 Posted by roncastillonyc@yahoo.com at 1:19 PM