John Huston directed this quasi remake of his very own "The African Queen". If the formula works, why mess with it? Here we have another two character adventure story with a prim woman and a rough around the edges man thrown together into hyper survival mode in an exotic locale during wartime. A nun (Deborah Kerr) and marine (Robert Mitchum) are the only castaways on a remote island in the South Pacific during WWII. Two polar opposites, they befriend each other and learn to survive even when the Japs land and takeover the island. Things get even knottier/naughtier as Mitchum starts falling for Kerr. Great suspense and terrific chemistry between the two leads (this is the first of four films they made together). Mitchum's own favorite of all his roles. 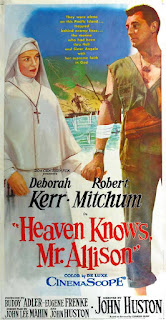 Posted by roncastillonyc@yahoo.com at 7:53 PM