This film version of Robert Louis Stevenson's tale of a scientist's experiments with mind and body transformations via a laboratory potion was castigated and an embarrassing flop on it's initial release.
Many thought Spencer Tracy's two character performance was hammy and hamfisted. He even thought it would ruin his career! It's time for a rewrite. Let's start with the production. It got the full luxe MGM treatment.There's nothing like fog-blanketed Victorian London to set a moody tone and here you get those eerie cobblestoned passageways with a murderous cloaked madman flitting about the barred parks and side streets like a superhuman acrobat. Chillingly beautiful. And then the cast: Tracy brings a nuanced interpretation to the halved protagonist, more psychological than Freddie Kruger scary. Stevenson's idea of Everyman being a receptacle of Good and Evil is ratcheted up another Freudian notch. The Evil is our id, sexual repression leads to beastly carnality. The good doctor is torn between his virginal fiance, Lana Turner as a dewey Victorian Barbie doll, and the lustier bad girl, Ingrid Bergman as a hotly-totsy barmaid garbling a dubious Cockney accent. Each woman toys with his inner urges (given how stunningly beautiful they're filmed by lensman Joseph Ruttenberg, is it any wonder?) and each summons up that creepy ol' Mr. Hyde in some disturbing shock moments. But if there's one reason to see how legendary director Victor Fleming spins the yarn, it's in the Jekyll-to-Hyde mutation sequences. The images that are careening thru Jekyll's brain are so bizarro you wonder "How did this get past the Hayes office??" Need I say more than Tracy flogging two horses with a whip, one white, one black, who morph into galloping naked Turner and Bergman? If that doesn't get you to watch this underrated classic I don't know what will. 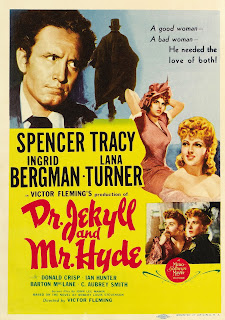 Posted by roncastillonyc@yahoo.com at 12:22 PM