To some degree, all WWII movies made before and during the war are propaganda pieces. If the Allies didn't win the battle in the end there was always hope to fight another day. This engrossing thriller is of the latter kind but with a twist: the POV of the protagonists is of the Germans. A U-boat has made its way across the Atlantic to attack Canada's Hudson Bay. The sub is bombed and sunk but six survivors led by a hissable Lieutenant (Eric Portman) have the delusional idea that if they just march on across the continent they'll somehow get to Vancouver to be saved by the Japanese!
It turns into  road picture as they encounter (and terrorize) various types of Canadian citizens along the way...eskimos, lumberjacks, religious Hutterites, Indians, Mounties. Some are played by big name British talent in showy cameos. There's Laurence Olivier as a French Canadian lumberjack doing a wince-inducing Blacque Jacque Shellacque accent, Lesley Howard as an art loving writer, and Raymond Massey as a Canadian soldier. And while the agitprop is laid on pretty thick (one of the main goals was to foster American sympathy for the war effort), it all works because of the suspenseful setpieces where those likable Canadians keep outwitting the nasty Nazis. Who doesn't love kicking Jerry ass? Plus there's a simply gorgeous score by classical composer Ralph Vaughn Williams, his first of several for the cinema. Also look for a teenage Glynnis Johns as one of the Hutterite maidens. 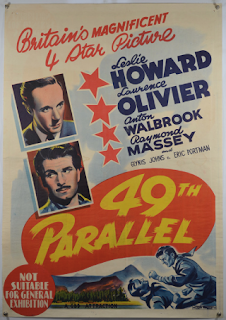 Posted by roncastillonyc@yahoo.com at 11:52 AM