One of the fascinating aspects of film noir is how malleable a genre it is, how it can combine with other genres to supply endless variations on the tenets of the form. Here it takes the shape of a moody melodrama, but because it's noir, the family story at it's core takes on a lurid psycho-sexual undercurrent. In the lengthy prologue, three young teenagers are party to a Big Secret that involves murder. Almost twenty years later the girl is Barbara Stanwyck who has married one of the boys (Kirk Douglas in his fine feature debut). Van Heflin is the second boy who in coming back to town shakes up the past...and everyone's world. Blackmail, betrayal, old passions, and yes, more murder are on tap. And if that's not enough enter Lizabeth Scott, the poor man's Bacall, to turn the sordid love triangle into a messy rectangle. Lording over the whole steamy stew is Stanwyck in her usual nonpareil form. No one did the Ice Queen Bitch better than her. Watch how she emasculates the two symbolically impotent male leads with just her eyes! That's acting.  And she does it in a knockout wardrobe of Edith Head shoulder padded stunners to boot. 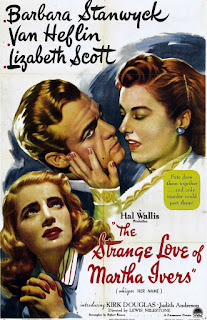 Posted by roncastillonyc@yahoo.com at 11:58 AM