The New Cinema of the 1970's had no room for slick picture-perfect rom-com's of Hollywood past. An Barbra Streisand's career was stalling in overblown gargantuan musicals (I remember one of MAD magazine's parody covers at the time, "On a Clear Day You Can Hear a Funny Girl Singing Hello Dolly Forever"). So this modest little comedy, basically just two characters and based on Bill Manhoff's hit Broadway play, was just what everyone needed. It was "adult", there were four letter words, nudity, sex, prostition, drugs, fetishes, all set in grimy, gritty Lindsay-era New York City. It was a little foul-mouthed and very funny. It was still boy and girl meet cute, hate each other, bicker, fall in love, bicker some more, and cue the happy ending. And the pairing of a staid pent up bookish guy who meets a flirty free spirit girl with sparks flying goes back to at least "Bringing Up Baby", but what puts this telling over the top is the pairing of a looser Streisand and her likable co-star, George Segal. You root for the sparring couple, and isn't that what romance pictures are all about? A young Robert Klein makes a good appearance, and extra points for the jazz rock score and end credit song by au courant band of the time Blood, Sweat, and Tears. 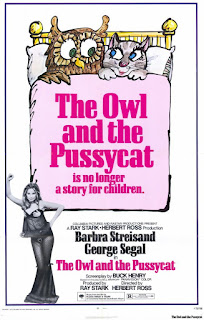