By the mid-1980's the moribund western genre needed a much needed kickstart, a fresh approach to re-ignite interest in the classic filmic form. Along came Clint Eastwood--in his first western in nine years--with this very serious elegiac picture where he's essentially resurrecting his 'man with no name' persona. And maybe resurrect is the wrong word, since he's playing a specter risen from the dead--or is he? We're in gold mining country in northern California sometime after the Civil War. A land baron (snarly Richard Dysart) is terrorizing a small panning community with his rough riding goon squad led by his son (Chris Penn). He wants their land rights, they need a miracle. As if on cue, in rides a mysterious stranger on a pale horse (see Revelation 6:8, aka 'Death') with almost super human strength and sureshot gunslinging abilities to save them. Eastwood barely raises his voice above a low rasp. You get the feeling he's not only playing with the mythos of the movie western, he's goosing his own cinematic legacy. If you like your oaters heavy with symbolism and meaning, this is your ticket. If not, you still get all those great Hollywood tropes: gorgeous mountain vistas, galloping horses, violent gunfights on main street, cowering womenfolk...all painterly lit by photographer Bruce Surtees in sepulchral tones of grey, brown, ochre, charcoal, and black. A fine entry to the canon. 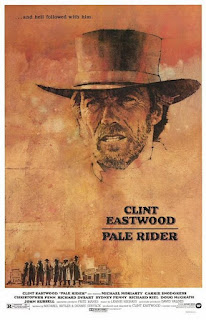 Posted by roncastillonyc@yahoo.com at 10:45 AM