Probably my favorite of Bette Davis' 1940's melodramas, a superb filming of Lillian Hellman's  play about greed, deception and their ultimate cost. She's the calculating and mercenary matriarch of a completely amoral turn-of-the-century family in the deep South. The main plot hinges on the double dealings amongst Davis and her two venal brothers (Charles Dingle, Carl Benton Reid) for the family business. It's a game of chess as they all try to outsmart the others for the financial spoils but completely blind to the effect it has on all the other 'good' members of the clan, Davis' daughter (wholesome Teresa Wright), the fragile sister-in-law (Patricia Collinge), and her sickly but defiant husband (Herbert Marshall). Intelligent script by Hellman is only aided by the dead-on direction of William Wyler. Watch for how he packs so much information in the frame, expertly utilizing cinematographer Gregg Toland's deep focus photography (he lensed "Citizen Kane" that same year). There's as much happening in the foreground and background as there is in the main center frame action. Davis plays it hard and bitter, with some scary kabuki-like white make-up, a mask hiding the cold heart underneath. Frightening and fascinating, the famous murder scene will give you chills. 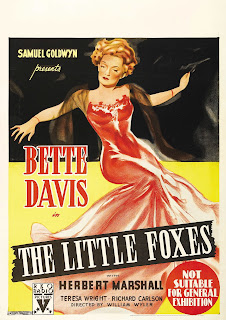 Posted by roncastillonyc@yahoo.com at 10:47 AM