Long considered one of the linchpins of 20th Century French cinema, how you feel about this grand, sweeping epic might hinge on your tolerance for doomed love stories told at a fever pitch. If you like swooning then this is your movie. We're in 1840's Paris with of a group of romantically intertwined actors in a pantomime theatre troupe. They meet cute, fall in love, have sex, fight, fall out of love, get jealous, spurn each other...over and over, you get the picture. It's all that very, very French outlook on life of 'better to have loved and lost than never to have loved at all'. The dialog tends toward the overwrought purply type and there's a lot of it, the thing clocks in at over three hours. But here's the thing, there's no denying the production is a feast for the eyes. The production design is superb, the recreation of the Paris streets are like nothing you've seen, with reportedly thousands of extras. There are numerous theatre and plays depicted with sumptuous sets, the acting milieu in front and behind the curtain is painstakingly depicted. This was the most expensive film made in that country up til that time,  which is how it got the nickname "France's Gone With the Wind." And then there's the mime. Wait, don't tune out! The mime scenes and playlets are pure joy to watch. Put any thoughts of a Frenchified Shields and Yarnell skit out of your head. The standout performer (and probably the best in the movie) is Jean-Louis Barrault. He's touching, funny, with liquid body movements that make you look at this kind of performing anew, and in the speaking part of the role his take on unrequited love will break your heart. 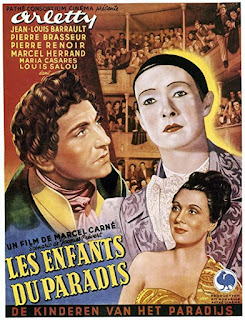 Posted by roncastillonyc@yahoo.com at 4:13 PM