Everything is pitch perfect in this costume drama adapted from the Broadway play based on the Henry James novella "Washington Square." Olivia de Havilland is the title character, an unexceptional only child of a very wealthy doctor (Ralph Richardson) in 1840's New York City. She's what polite folks would call 'a plain girl'. And boy, does her domineering dad let her know it every chance he gets. Sometimes the wounds from family are the deepest ones of all. When she gets the romantic attention of an extremely handsome but penniless social climber (Montgomery Clift), her father balks. He's not buying it and flatly says so. The drama builds on two fronts: will she defy her father for this new beau and risk her inheritance? And more importantly will we find out if this suitor is truly sincere in his feelings? How we watch de Havilland's character confront these emotional hurdles is the stuff of stellar movie acting. She won a well-deserved second Oscar for this performance. Richardson is haughty menace personified, a cruel example of the unfair power men can yield over women (as if you need to go back to Old New York to find it). Beautiful Clift, chiseled and cheekboned, in the role that would catapult him into true stardom, dances a fine line. You don't really know his true feelings for this woman until the famous ending. And get ready, because the final scenes are heartbreaking, cathartic, and chilling all at once. And let's not forget a great supporting turn by Miriam Hopkins as the supportive confidante aunt, her comic timing is needed to break up all the heavy phychological mayhem getting thrown about. Expertly directed by William Wyler with a nice score by composer Aaron Copland. 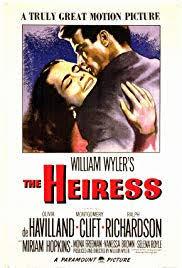 Posted by roncastillonyc@yahoo.com at 6:54 PM