Rosalind Russell was in her wheelhouse with comedic roles. They gave her free reign to display her gifts with the quick comeback, the insulting zinger, or the subtle facial expression that said it all. This screwball comedy was no exception. Adapted from a hugely successful Broadway play, she's a newspaper reporter making a new start for herself in The Big Apple. Her beautiful aspiring actress younger sister, an effervescent Janet Blair, is in tow as well. With no money but high hopes, they find a cramped basement apartment in Greenwich Village complete with an annoying landlord (George "Mr. Kravitz" Tobias from TV's "Bewitched"), and a slew of other neighborhood characters and crazies. Their place becomes a revolving door of madcap confusion. Russell tries for a job at a literary magazine and falls for the handsome editor (Brian Aherne). Snappy and delightful. Oh, and look for a fun cameo in the final scene! 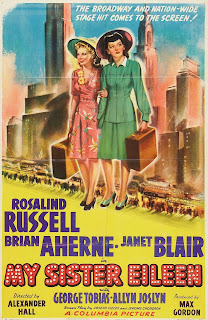 Posted by roncastillonyc@yahoo.com at 4:15 PM