Before there was Garland, before there was Streisand, and yes, before there was Gaga, there was this first remake of a soapy Hollywood story that, defying all odds, works every time it's told. For the record, the original was titled "What Price Hollywood?". Other than the name change the basic plot in every version is stet: a young performer brimming with untapped talent meets and falls in love with an established star at the peek of his fame but who's on a downward trajectory involving substance abuse. He helps her make her mark and as her career skyrockets while his hits the skids. Tears and histrionics ensue. This version starring Janet Gaynor and Frederic March zips along and the economy of storytelling is refreshing if you're used the subsequent versions that were all musicalized with songs and productions numbers that pad out the action. And it's obvious why actors are drawn to these roles. The female gets to suffer nobly and stand by her man as he self destructs and the male lead has all that internalized self-imolation to pull off. Both stars here shine, March especially so. His tragic ending is particularly poignant without being hammy. This was also the first Technicolor movies to more artfully use the spectrum of shades available, more realistic shadows and tones than the garish look of color films up until that time. 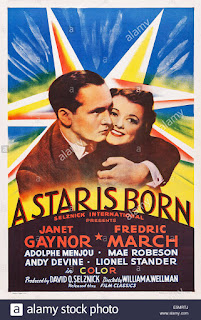 Posted by roncastillonyc@yahoo.com at 6:06 PM