This is a veritable salmagundi of all things Bob Fosse. The famed theatre and film director/choreographer was swinging for the bleachers here, pouring all of his signature style and themes into one big explosion of splashy and spiky entertainment. Just like the man himself there's a lot to love/hate. It's like his "81/2" but with musical numbers, a semi-autobiographical look at an artist grappling with his artistic output (or lack thereof) and his complicated relationship with the women in his life. Fosse's stand-in is Roy Schieder as 'Joe Gideon', a director of stage and screen stretching himself too thin between too many projects and using booze, pills, and sex with too many chorus girls to get him through it. It pushes him to a heart attack and the storytelling conceit of the picture is that it takes place entirely in that split second when he's on the operating table, balancing on the brink of death. His life is recounted in flashbacks during a conversation he's having with the beautiful Angel of Death, a sexy Jessica Lange. It sounds more complicated than it is. Joe is not a nice man but Schieder's performance makes you like him anyway and you can see why his ex-wife (Leland Palmer), his current girlfriend (Ann Reinking), and young daughter (Erzebet Foldi) forgive all his sins and shenanigans, they love him and don't want him to die. Death and dying is nice material for a musical, right? Well, it's the dance numbers that make this magnum opus truly great. From the opening showstopper, an open Broadway cattle call  for chorus dancers, essentially "A Chorus Line" done in five minutes, to the way-ahead-of-its-time "Air-rotica" number, a slithering orgiastic hot house of sweaty limbs and torsos, it's vintage Fosse. Isolated body parts, multiple dancers in shaped formations, fingers snaps, splayed hands, bowler hats, you name it, it's here in spades. Nobody used the medium of film better to display an ownable dance vernacular. And while Fosse's work could be cool and distant, there's one small number in the middle of the movie where Rienking and the daughter do a special living room duet just for Gideon, a precious number of love and razzmatazz that's the very essence of joy in dance. You get the feeling that very joy is what Fosse strove for throughout his career. 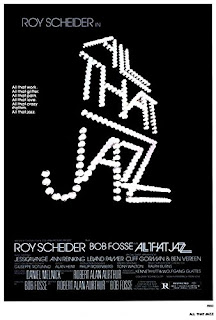 Posted by roncastillonyc@yahoo.com at 12:42 PM