The paper thin plot of this historic epic is beside the point. It's all about the sumptuous over-the-top visuals. And what visuals! Under the exacting eye of director Josef von Sternberg this eyecandy feast is unlike any other film from the golden era of the Hollywood studio system. Played almost like a silent film (there are numerous title cards detailing plot points), it's the story of Russia's Catherine the Great as played by von Sternberg's oft used muse, Marlene Dietrich. We see her from young womanhood as Germany's Princess Sophia, then as she's whisked away in an arranged marriage to be the wife of the Grand Duke of Russia, then as she ultimately becomes the famed Empress. Each scene, each frame, is chock-a-block full of detail, the beautiful and the profane. Given this was the Pre-Code era, there's a lot of sex and sexuality to go around, even the depraved. Scenes of Russian torture are hard to watch even today. Von Sternberg has a heyday with the layered, sometimes grotesque sets of the Russian palace, and he films Deitrich as if she was a goddess, and by gosh, with her unique beauty she was. Festooned in one Travis Banton creation after another she's the celluloid screen icon of your dreams. It's fascinating to see her transform from the innocent and wide-eyed  princess--not the usual way we see this actresss-- and bloom into the infamous manhandling czarina who uses her sex to conquer a country. This is one film that must be seen to be believed. Gorgeous indulgence. 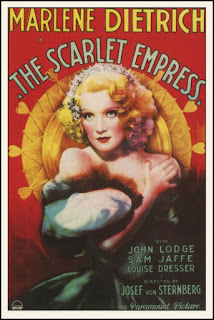 Posted by roncastillonyc@yahoo.com at 3:53 PM