A textbook case of noble Hollywood liberalism. The cause here was anti-Semitism. Gregory Peck is a successful magazine writer on his first big assignment for a new publication. His brainstorm (which takes a while to hit him) is to tell everyone he meets that he's Jewish, so that he can experience first-hand this nasty societal practice. Why the magazine couldn't get a real Jew to write a similar story is never really touched on, we're supposed to assume that Jews just weren't given those kinds of jobs? Nevertheless, experiece it he does, at work, at parties, at hotels, even his little boy (a very good Dean Stockwell) gets taunted in the schoolyard. You get walloped with the message--anti-Semitism, BAD!--over and over again. Concurrently, Peck falls in love with a beautiful socialite (a starchy Dorothy MacGuire) who claims to be open minded about Jews but it irks Peck that she too easily accepts the the social status quo, the unspoken rules about those people and their place in the world. It's all done with taste and decorum and that's probably why it feels so dated and preachy. But sometimes the reason to watch a film like this is for the time capsule aspect of understanding what times were like when the movie was made...to let us see how far we've come and how fare we've still to go (it's not like anti-Semitism has been banished for all time, hell, there's a white supremacist in the White House now!) The other reason is a fine generous performance by Celeste Holm who took home the Oscar for Best Supporting Actress. She's the fashion editor of the magazine who befriends Peck and almost, just almost, gets the guy. She's funny, self-effacing, witty, and smart. A nice depiction of a career woman which was a rarity in those days. 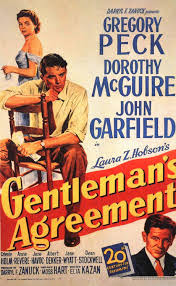 Posted by roncastillonyc@yahoo.com at 2:12 PM