This is essentially director John Ford's telling of Custer's Last Stand , with bits of dramedy and romance thrown in. It's the 1870's and a strict by-the-book captain (Henry Fonda) arrives to take command of a remote western army post with his teenage daughter in tow (Shirley Temple). He quickly alienates all the servicemen including the second in command, an easy-going John Wayne. His biggest mistake is underestimating the tribes of indians in the territory, one that brings about his doom (that's not a spoiler, if you don't know what happened at Little Big Horn then tough luck). Fonda plays against his good guy screen persona effectively here, he's a tight ass martinet that's really frustrating. Temple is around for the secondary story, a budding love angle between her and a young officer (John Agar). She's pretty but her acting abilities never really followed her into adulthood. The rest of the cast is filled out with Ford's recurring stock company (Ward Bond, Harry Carey, etc), and they provide some strained humor as the ragtag misfits trying to measure up to Fonda's strict standards. The real reason to see this picture are the action scenes with the calvary going at it full force with the injuns. There's something so Hollywood about all those whooping Indians on horseback in long tracking shots running smack dab into the cavalry with their bugler blaring away. And it's all set in Ford's beloved location, Monument Valley, with the odd mesa and rock formations dwarfing the men fighting below. The vistas he composed solidified to this day most Americans' mental image of what expansion into the West must've looked like. 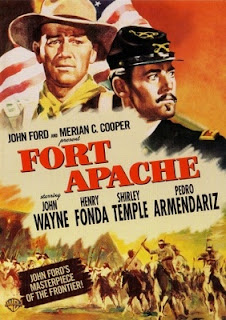 Posted by roncastillonyc@yahoo.com at 1:27 PM