An intriguing curio, an art house Western. Director Martin Ritt and screenwriter Michael Kanin remade Akira Kurosawa's classic meditation on memory and truth, "Rashomon", and plopped the action in the old West of tumbleweeds and saguaro cacti. It almost works. Three travelers--a preacher (a pre-Trek William Shatner), a gambler (Edward G. Robinson), and a panhandler (Howard DaSilva)--meet at an abandoned railroad depot and recount a recent trial of a Mexican outlaw on trial for the murder and rape of a Southern aristocrat (Laurence Harvey) and his wife (Claire Bloom). In flashbacks we hear three different versions of what happened, all different (the murder victim's take is told thru the mystical conjuring of an old Indian shaman). Who do we believe? Who's telling the truth? And even more importantly, is truth ever really knowable? It's a profoundly simple premise that's been borrowed countless times since, but here's no better telling than Kurosawa's original. This one falls short for one big reason: the culprit is played by a game Paul Newman in dark pancake makeup and garbling a Frito Bandito accent. The performance just doesn't work in our PC culture. That said, the rest of the cast  does a fine job. And the first version's justly famous cinematography is rivaled by some beautiful work this time by master DP James Wong Howe. The dappled clearing where the crime takes place and the desert vistas look like Ansel Adams prints. There's also a less ambiguous and explanatory Hollywood ending, just to make sure you 'get it', as if us dumb Americans can't think for ourselves. A sincere, if failed, effort that film buffs will want to compare and contrast with the masterwork. 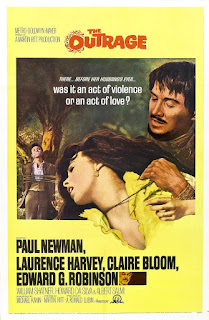 Posted by roncastillonyc@yahoo.com at 3:54 PM