An affectionate valentine to Old Hollywood and the early days of live television. The year in question is 1954. The incomparable Peter O'Toole is a faded and boozy big screen swashbuckling idol--think Errol Flynn--who has been booked to guest star on the popular comedy/variety show of the day, "The King Kaiser Comedy Hour". It's up the the writing staff's novice, Benjy Stone, to keep O'Toole sober and present during the week's prep for the show. And although he commands the whole movie with a performance that deftly balances laughs and pathos, the rest of the supporting cast are all stellar, each carving out quirky characterizations that bounce off each other like fizzy bubbles. Mark Linn-Baker is the young writer, a newcomer whose timing rivals the best of the Borscht Belters. He holds his own with the formidable presence of O'Toole. Joseph Bologna is the bombastic headliner of the show, supposedly based on the infamous reputation of Sid Caesar. Other zany standouts are Bill Macy as the head writer, Selma Diamond as the sandpaper voiced wardrobe lady, Adoph Green as the manic producer, and Lainie Kazan as Linn-Baker's mother, who hosts the big star to a home cooked meal in the deep recesses of Brooklyn. This one sequence is worth seeing the whole picture, it's comedy gold. If the whole enterprise has the rhythms of a classic sitcom, like the writers' room scenes of the old "Dick Van Dyke Show",  that's not necessarily a bad thing. Director Richard Benjamin so clearly has a love of the era that it shows in every slapstick set piece and in the way the whole candy-colored production looks like a confection that could only exist in our misty water-colored memories. 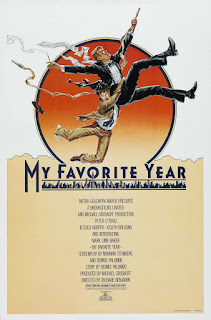 Posted by roncastillonyc@yahoo.com at 2:28 PM