Steep balconies and tight leotards. This is by no means a definitive version of Shakespeare's classic play, look to the stage for that, but it is a fine movie version of the celebrated work, one that showcases a major Golden Era Hollywood studio working at full throttle. MGM pulled no punches on the stars, sets, and costumes, that's because wunderkind producer Irving Thalberg wanted a showcase for his popular leading lady (and wife) Norma Shearer. Sure you can quibble with a lot here. Purists will cringe that more than half of the dialog of the play has been cut, but the essential story stays in tact. Shearer and  her co-star, Leslie Howard are way too long-in-the-tooth to play the star crossed teenaged lovers, but they both give sincere nuanced performances. Nothing stagey here, they're intimate and conversational, the age thing becomes moot. Credit director George Cukor for drawing out the realism in his cast, but for also balancing out the story with some big set-pieces. This production is stuffed with visual delights. Massive outdoor Verona sets for all those Capulet/Montagu sword fights, elaborate Agnes DeMille choreographed dance numbers for the party where the leads first meet (it's fun to visualize the dance at the gym from "West Side Story"here), and eye popping Renaissance costumes by Adrian. And then there's John Barrymore as Mercutio and Basil Rathbone as Tybalt. Again, both too old for the roles but what fun to hear those voices spouting the Bard. Reflecting years later , Cukor said he would have gotten more "garlic and Mediterranean into it" but it holds up fine and is worth the look. 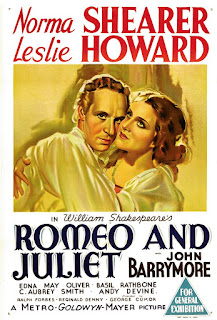 Posted by roncastillonyc@yahoo.com at 10:55 AM