Jack Benny's movie career was mostly a grabbag of film shorts, lightweight comedies, and cameos. His lengthy career in vaudeville, radio, and TV are really what kept his star burnished for decades. But he did have one truly excellent film to his credit, one helmed by a master director with a first rate script and stellar supporting cast. And it was an out and out bomb. If ever there was the right picture at the very wrong time, "To Be or Not To Be" was it. It's a WWII thriller-comedy about a Polish theatre troupe putting on subversive anti-Nazi plays making fun of Hitler and the Third Reich while they try to foil a plot that could endanger the underground resistance. With the real Axis powers goose--stepping through Europe and the Pearl Harbor attack just four months prior, the picture was doomed from the get-go. To add to the tragedy, Benny's co-star, the luminous Carole Lombard, was killed in a plane crash a few weeks before the release date. But time has been kind and it's now a comedy classic. The movie zips from farcical gags, perfectly timed banter, to hairbreadth escapes in a flash, all the while making some serious commentary on the the damnable madness of the Nazi scourge. Benny has the timing of Swiss watch and Lombard was that rare combo platter of smarts and sex appeal. A comic gem. 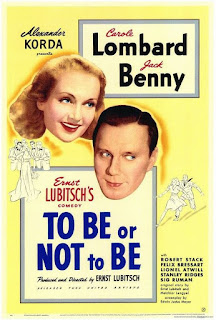 Posted by roncastillonyc@yahoo.com at 6:44 PM