You come to this French film with the knowledge that it's one of the most edge-of-your-seat thrillers ever made. But, really, it was made almost 65 years ago, it's probably a little tame by today's standards, right? WRONG. It not only lives up to the lore but it exceeds it. How could it not with this--pun intended--powderkeg of a plot: a group of ragtag, down-on-their-luck oil workers have to deliver two truckloads full of nitroglycerin over an impossibly treacherous 300 miles of backroads in some Godforsaken South American country to a blazing refinery fire so that it can be extinguished. The first hour is all about the set up and character exposition, if we didn't care for these sad fellows then none of the rest of the picture makes sense. Once they hit the road, they're put through one white knuckle setpiece with those trucks after another. These scenes are almost Rube Goldbergian in complexity and these players have to figure out each 'trap' or they're blown to Kingdom Come. The director, Henri-Georg Clouzot, is oftentimes referred to as "the French Hitchcock", with good measure. Each scene is not only squrm-inducingly suspenseful, but character defining as well. The break out star is Yves Montand. Handsome as all get-out, brashly cocksure, and filled with almost fatally flawed hubris, you want to throttle him for being so reckless. There's not a little commentary about the rapacious nature of the big American oil company that is giving so little value to the lives of these men, and by extension to the environment it's harming. You can bet that if Big Oil was a bad thing back then it's even worse now. Minute for minute as exciting as the best roller coaster you've ever ridden, don't miss this one. 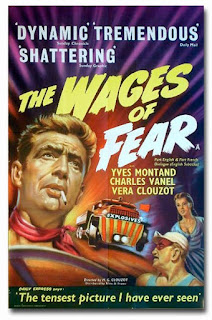 Posted by roncastillonyc@yahoo.com at 1:49 PM