French director René Clair made relatively few films outside his native France but his adaptation of Agatha Christie's most famous of whodunnit puzzlers was made in Hollwood and it's first rate, still probably the best version of this mystery ever filmed. There's a light touch to what is essentially a horrific premise: a fiendish murderer has invited ten strangers for a weekend getaway to a secluded mansion on a  small island off the English coast and the guests are eliminated, some gruesomely, one by one in the fashion of a children's nursery rhyme, ("Ten little Indian boys went out to dine, one choked his little self, and then there were nine"...you get it). Each of he guests has a nefarious incident in their past where they themselves caused the death of an innocent, the killer is playing a deadly game of judge and jury. In between the mayhem and fingerpointing among the culprits, you get funny dialog and a few well-placed shivers. The cast is first rate, boasting some of the great character actors of the time like Walter Huston, Barry Fitzgerald, and Judith Anderson. Don't even attempt trying to figure out the identity of the murderer, Dame Agatha was too skillful for that. Just enjoy watching the puzzle unfold right up to the last macabre joke before the endtitles. 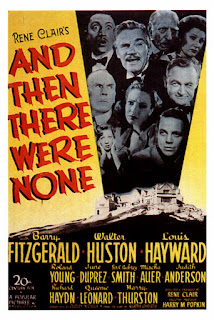 Posted by roncastillonyc@yahoo.com at 1:06 PM