He was chiseled but notoriously short for a leading man,  and her icy features were hidden most of the time behind a famous peek-a-boo hairstyle, but for a brief moment in Hollywood history they were the IT couple starring in seven films together. The best were films noir that showcased their sexy cool chemistry. Like this very fine outing, their first pairing. Everyone here is after oily Laird Cregar who has sold some wartime chemical weapons secrets to the Japanese (he's the heavy alright, much is made of his insatiable appetite). Ladd is an amoral hitman who Cregar has double-crossed, he's monomaniacally hellbent on revenge. Lake is a nightclub singer who the baddie has his eye on, so the Feds enlist her to ferret him out. And then there's Robert Preston as her affable detective boyfriend who's on the case too. It's a roundelay of chases and intrigue in a grimy, realistic Las Angeles, still looking worn and weary from the Depression. There are a number of offbeat touches that give the story some witty bite, like Lake's two nifty nightclub numbers penned by tunesmith Frank Loesser. Cutting through it all is the magnetic attraction of the two stars and the agitated tripwire performance of Ladd. No wonder this portrait of pure menace put him on the map. Poor Preston, he had top billing but you almost forget he's in the picture. Oh, extra points for one of the best film posters of all time too. 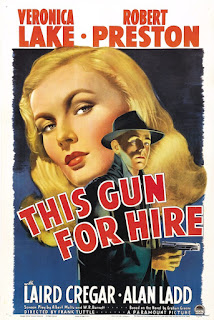 Posted by roncastillonyc@yahoo.com at 8:03 PM