They're well nigh on being 80 years old, but the films of Alfred Hitchcock's British Period, his vastly entertaining oeuvre before he crossed over the pond to the cinematic heights of Hollywood, are looking as fresh and fascinating as ever. Case in point: this very fine spy picture that boasts some haunting visual set pieces and a thoughtful study on the human toll of war and the causal need for state sanctioned murder. John Gielgud is a reluctant undercover British agent sent to Switzerland to find and kill a notorious German spy. He's aided by a scene stealing Peter Lorre as an amoral devil doll sidekick. There's no low ebb in this amped up performance; he's a walking id leering at all the ladies or dead set on enemy homicide. The cooly beautiful Madeleine Carroll--the proto "Hitchcock Blonde"-- is also on hand as the third spy assigned to the case. She's Gielgud's marital cover, slowly falling for her faux hubby, but also swatting away the advances of a charming American tourist, Robert "Marcus Welby" Young. The cast effortlessly handles the witty dialog and espionage derring-do, while Hitchcock cannily exploits the Teutonic locale. You get loads of Alps, mountain climbing, cute Dachshunds, and a sinister chocolate factory, but more importantly, a thoughtful meditation on the price of human life during wartime. Best of all, you can catch this gem on YouTube, see it here. 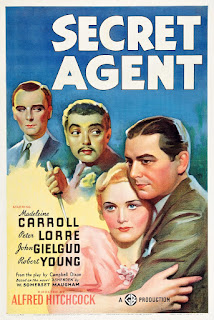 Posted by roncastillonyc@yahoo.com at 7:27 PM