This screen adaptation of Tennessee Williams' play "Orpheus Descending" is rambling and messy but it boasts some fine acting by four of the last century's greats, all of them Oscar winners. A modern day telling of the ancient Greek myth of Orpheus, Marlon Brando is the studly guitar toting wanderer who happens upon a small Southern town and charms a trio of pent of up women. There's Maureen Stapleton, the bigoted local sheriff's wife, who mothers the stranger; Joanne Woodward, the artsy beatnik who just wants to bed him; and Anna Magnani, the middle aged proprietress of the town mercantile caught in a stifling marriage and in sore need of love. Director Sidney Lumet creates a fine sense of longing and desperation as the characters all intermingle and untangle until the final tragic denouement. (You don't have to be Edith Hamilton to know Brando's character is destined for a bad end, besides, this is Tennessee Williams Land, is there any other option?). See it especially for a couple of the playwright's patented and haunting soliloquy's; he had Brando in mind when he wrote the play, and the actor is mesmerizing here. There's a reason he was considered one of the best of his time. He's scary good. 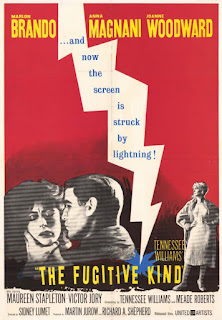 Posted by roncastillonyc@yahoo.com at 8:33 PM