This little-known film is almost unclassifiable, a sui generis fantasy/film noir mashup. Also known as "The Devil and Daniel Webster" and taken from a story by Stephen Vincent Benét of the same name, it comes from the same propulsive creativity in Hollywood studio filmmaking that birthed "Citizen Kane" in the same year. James Craig is a 19th Century farmer with a streak of bad luck and failing crops. Enter the Devil himself, Walter Huston as "Mr. Scratch", who offers Craig a life and fortune too good to pass up...only--you guessed it--he has to sign over a little thing called his soul. The only person to turn to is a wily politician and lawyer, Daniel Webster (the blustery Edward Arnold), who just might outwit the evil conniver in a fantasy court of law. Each scene and frame of the entire piece is filled with artistry and masterful direction. Kudos to director William Dieterle for helming a one-of-a-kind cinematic treat. Look for that "Cat People" vixen Simone Simon as the Devil's femme fatale luring Craig to his possible doom. 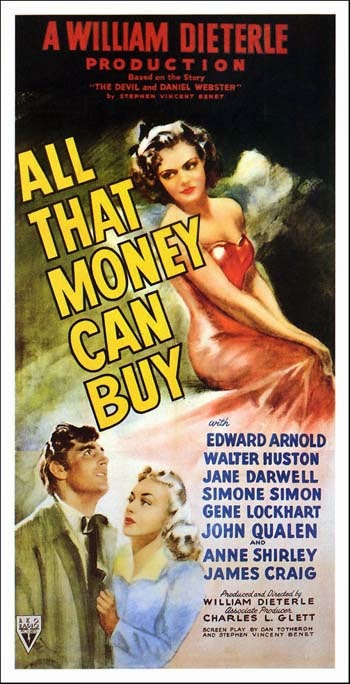 Posted by roncastillonyc@yahoo.com at 11:38 AM