You really can't go wrong with a cast like this. Put Clark Gable, Jean Harlow, Wallace Beery, and Rosalind Russell aboard a ship in the South China Sea and throw in a love triangle, some gun-running intrigue, a few action sequences, and some snappy dialogue and you come out a winner. This is basically the same set-up as the Gable/Harlow success "Red Dust" from a few years prior, he's the ship's captain, the mancatch torn between a prim socialite (Russell, in what she called her career's "Lady Mary" stage), and an earthier sexpot (guess who). Beery is the piece's villain, trying to pull off the weapons skullduggery under the eyes of Gable. There are no real surprises but it leaves you feeling like you got your entertainment's worth. 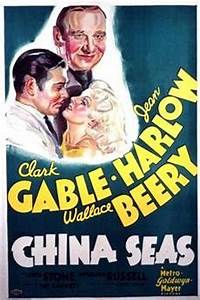 Posted by roncastillonyc@yahoo.com at 11:04 AM