The great film critic Pauline Kael once wrote, "Movies are so rarely great art that if we cannot appreciate great trash we have very little reason to be interested in them." This mid-century potboiler is trash of a very high caliber. It's the kind of film you know is "good bad" going in, and you know the filmmakers know you know it too, so everyone just sits back and wallows in the gooey lushness of the proceedings. It was probably a hoot to make and it's an even bigger one to watch. It uses that tried-and-true plot trope of three young women coming to the big city seeking careers and love. From "Three on a Match" to "How To Marry a Millionaire" to "Valley of the Dolls", Hollywood has mined a lot of gold (or at least gold plate) from this set-up. Here, the blonde, brunette, and redhead are Hope Lange, Diane Baker, and Suzy Parker. They're all eager gals in the typing pool of a successful Manhattan publishing company with Big Dreams of moving up the corporate ladder thru hard work...or maybe just snagging that handsome Vice President by the water cooler (here played by cleft-chinned Stephen Boyd). They have to dodge the roaming hands of the old drunken letch in the corner office (Brian Aherne) and the withering condescension of the brittle bitch boss editor, Joan Crawford. Each of the three lovelies falls for her own Mr. Wrong, so there's lots of sturm und drang about pre-marital sex, this being the buttoned down 1950's. Should she or shouldn't she? Only her screenwriter knows for sure. The whole thing plays like a long lost episode of "Mad Men" but without the incisive dialog or character development. But that's not a bad thing. One man's movie trash is another's treasure. The production has that sleek modern sheen of post-War America (the office is in the iconic Seagram Building). Men in gray flannel suits, women in Lilly Daché Juliette caps, lots of burnt orange and turquoise walls with abstract art...it's a mid-century wet dream. Add to that a syrupy score by Alfred Neuman and a title song by Johnny Mathis and it's popcorn time. 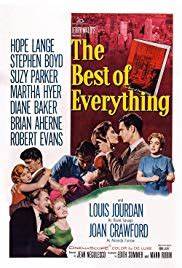 Posted by roncastillonyc@yahoo.com at 7:37 AM