Is it possible to make a great film from Joseph Heller's celebrated novel about the evils and hypocrisies of war? The short answer is probably 'no'. The very form of the novel, an elliptical non-sequential series of episodes barely masquerading as plot would be the first hurdle. Then there's the frustrating, nonsensical bureaucratic-ease that pervades much of the dialog. And don't let's forget that most of the characters are charlatans, blowhards, cowards, criminals, or just plain idiots. It's a wonder then that director Mike Nichols and screenwriter Buck Henry managed to pull together a noble effort, a somewhat more coherent movie out of this knotty source material. The (anti)hero is Yossarian (Alan Arkin), a WWII fighter pilot stationed on an island off the coast of Italy. All he wants is to fly his last bombing mission so he can get the hell out of the war and back home. But like Lucy with the football, his superiors keep snatching away his goal, forcing him to keep flying. The soul sapping futility is the point of the piece, and if it weren't for the all-star fine cast most of the satiric humor wouldn't work, but with pros like Richard Benjamin, Martin Balsam, Jack Gilford, Bob Newhart, Anthony Perkins, Martin Sheen, Jon Voight, Bob Balaban, Paula Prentiss, and Orson Welles, they pull it off. At least most of the time. It also doesn't hurt that Nichols was given a hefty budget to make the wide-screen production truly handsome. There's one flying sequence with a a full squadron of real   B-52's taking off that is draw dropping, something we'll never see the likes of again sans CGI effects. 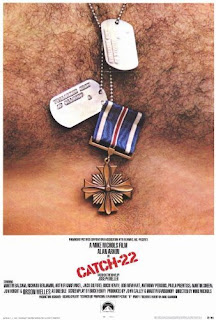 Posted by roncastillonyc@yahoo.com at 6:18 PM