The 1960's were the apex of British cool... The Beatles. The Rolling Stones. Twiggy. Carnaby Street. James Bond. 'The Avengers'. And in his career defining role that would catapult him to worldwide fame, there was Michael Caine as Alfie. The personification of the hip, cheeky, devil-may-care attitude every young man of the day aspired to. Alfie is a working class young man with style to spare who's the bad boy ladies man, flitting from one broken heart to the next with nary a regret. Life is too short for him to be weighed down with something so downer as responsibility. And he gets away with it scott free. Why? Because he's so charmingly lovable. A cad, a bounder, but Caine infuses him with so much likability you forgive it. But a good thing doesn't last forever and things take a dramatic turn when Alfie confronts some of the harsh consequences of the life he's been leading. The movie's famous stylistic schtick is Caine breaking the fourth wall to talk the audience, his stream of conscience philosophies sometimes happen in scenes with other characters but they don't notice it. Probably a holdover from the stage play from which it was adapted, in the hands of a lesser actor it might grate, here it sings. There's also a zoftig Shelley Winters in three short scenes, despite her second billing, as a man hungry cougar who teaches Alfie a cold lesson in love. And let's not forget the title song over the end credits, one of the premier masterpieces of the Burt Bacharach/Hal David songbook (it's the composer's personal favorite) sung by that other 60's pop icon Cher! 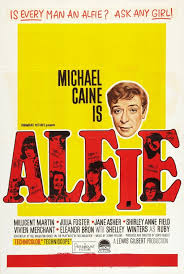 Posted by roncastillonyc@yahoo.com at 4:08 PM